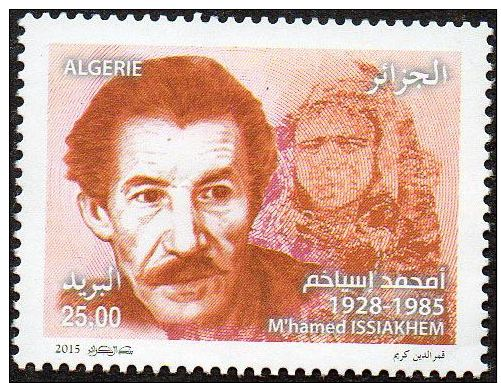 Men of Culture  M’hamed Issiakhem (1928-1985):
http://www.philatelyfriend.com/
M’hamed Issiakhem was born in June 17, 1928 near Azeffoun, Great Kabylia. He spent his early childhood and has Relizane in 1943, still a child, it is the left arm amputated due to accidental handling a grenade. This drama, in which he lost three members of his family. From 1947 he attended classes at the Society of Fine Arts of Algiers and then, until 1951, those of the School of Fine Arts of Algiers and in the company of Mesli Louail. From 1951-1953, he attended during these years, the workshop Legueult. It is then I attracted art brut and Dubuffet, but also by abstract art. but he chose to return to Algeria.
Of 1963, he began his national and international career and is involved in all major Algerian art exhibitions abroad and artistic life of our country. Founding member of the National Union of Plastic Arts, he worked as a cartoonist and produces banknotes, posters, as well as -Posted stamps. In 1973, he received the Gold Medal of the International Fair of Algiers and in 1980 he received the first gold Simba Rome, Unesco award for African Fart.
In 1982 and 1984, M’hamed Issiakhem organizes two retrospective of his work. II died December 1, 1985 following a long illness. Throughout his career, M’hamed Issiakhem expresses primarily the pain and suffering of human beings. His entire work reflects the critical, sometimes loaded with a certain bitterness, he throws on the human condition, This awareness will be maintained by his personal pain he will project down to his last works.
Facebook
Twitter
Pinterest
WhatsApp
Previous articleMosaïques des muses Musée Cherchell DZ N° 032.12 le 18 Décembre 2012
Next articleWORLD REFUGEE DAY DZ N° 011.15 le 20 juin 2015